The Bridal Gallery > News and Features > Features > A Leap Year Proposal – would you?

The tradition goes way back to Ireland and the Fifth Century when St Bridget complained to St Patrick that women had to wait too long for suitors to propose. He gave women a single day in a leap year to pop the question—the last day of the shortest month.

The story goes that Bridget went down on one knee and proposed to Patrick but he declined, kissing her cheek and handing across a silk gown to ease the disappointment. The first historic record of a woman proposing on February 29th comes from 13th Century Scotland, where a law was passed stating that a man refusing a proposal on the leap year must pay a fine, which could range from a kiss, right through to a silk dress or, most commonly, a pair of gloves.

The leap year proposal is not for most women. Many will dismiss the idea as a ridiculous tradition, but for others it will be seized opportunity to do things differently. The day that comes around only once every four years so for those who will be acting upon tradition, they will need to think fast, and watch out for the gloves. 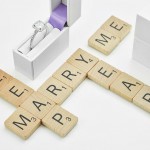