The Bridal Gallery > News and Features > Features > Meet our Designers: Romantica of Devon

Back in the earliest days of The Bridal Gallery, we were operating from a sizeable conservatory at the back of my parents house, and had been selling pre-owned gowns.  It was time to take the business forward and that meant connecting with designers and asking them to supply us with new gowns that we could then take orders from in different sizes, colours etc.

This proved to be not quite as easy as you’d imagine. Home-sellers were frowned on by the industry (and they still are – they pay no rent or business rates and have minimal overheads), and despite the fact that in the short time that we’d been in business, two local bridal shops had disappeared taking with them Bride’s money & dresses and we’d been able to help the distraught girls, none of the designers that were contacted were interested in working with us.

Except Romantica of Devon.  At the time they were a small family-run business, based in Tiverton in Devon and run by Mike & Sally Waddington.  Sally was the creative genius and Mike was out on the road selling the collection to other small businesses like us! He agreed to visit us and turned up in a big white van which had dress rails running the length of the sides and was crammed with gowns. He carefully helped me to select just three styles which we were both confident that we’d be able to sell.  We loved that each dress had a little blue lace rosebud stitched into the lining.  It’s the ‘Something Blue’ that all Brides need!

Twelve weeks later, those styles arrived and the rest, as they say, is history!  Romantica is still our largest supplier of gowns, beautifully designed & created, with superb attention to detail, whilst keeping a realistic price point for the Bride’s of today.  They are a big player in the British and European bridal industry, but still retain that family-run business feel that they had all those years ago.   They now have two more brands in their portfolio, ‘Pure’, aimed at the more budget-conscious Bride & ‘Opulance’ which represents their higher-end priced gowns, both of which we’ve carried in store over the years.

Sally is still at the helm, Mike, we sadly lost to cancer a couple of years ago.  One of the lovliest men in the industry and hugely respected by so many people, as was shown by the number of people who crammed into a little church in Devon one morning to show their respects.

We’ve just taken delivery of our new collection of Romantica of Devon gowns & can’t wait to start showing them off to our Brides.  They’re very different from the styles of the mid-1990′s, every year the collections just seem to get better, and they all still carry the Romantica of Devon blue lace rosebud stitched into every gown. 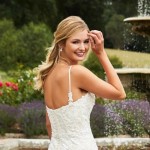